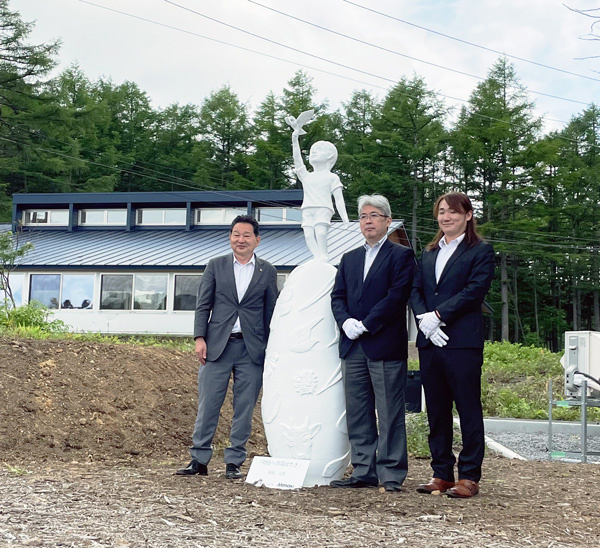 The large monument, 2m30cm long and weighing about 35kg, depicts the moment when a bird flaps its wings trying to fly away from a boy's hand. It has been installed near the track of GMO Athletes Park Yunomaru in Yunomaru Kogen, the mecca for high-altitude training where many top athletes visit for training.

The monument, titled "Flap for Tomorrow," was printed using Mimaki's 3D printer by enlarging a small clay statue created by Mitsuhiko Hotta, a sculptor and a special advisor for community development of Tomi City. The statue, designed by Mr. Hotta and created with clay, was scanned with a 3D scanner into data, which was then used to produce the model using Mimaki's 3DGD-1800, a large 3D printer capable of producing models up to 1.8 meters in height. The oval base is engraved with animals and plants associated with Tomi City and Yunomaru Kogen, and the grooves from the printing process are left intentionally to show that the piece was produced with a 3D printer.

About the title "Flap for Tomorrow," the sculptor, Mr. Hotta, says, "I named it with the hope that not only athletes but also children living nearby will grow up in this nature-rich area and take off toward a bright future, flapping their wings from this place. I wish a great achievement for the children and athletes who work hard at Yunomaru Kogen."

Mimaki's 3DGD-1800, used for this project, is a 3D printer featuring large and high-speed 3D printing with a maximum print size of 1,450 × 1,110 × 1,800 mm and a print speed of 350 mm in height per hour. *1 Besides artworks like this one, Mimaki also supports local sports teams in Nagano Prefecture by producing and donating a life-size figure of Wayne Marshall (211 cm) to the Shinshu Brave Warriors, a professional basketball team in Nagano Prefecture, and a new ball stand featuring mushrooms from Hokuto Corporation, the club sponsor to AC Nagano Parceiro that plays in the J3 League of the Japan Professional Soccer League.
3D printer to support local Nagano sport teams! Created 3D printed objects with a large 3D printer