Challenges
Improvements
Since our existing UV printer for creating soft packaging samples causes color unevenness, we want to make a replacement purchase. Printing quality should be as high as that of gravure printing in mass production.
UCJV300-75 has cleared our requirements such as speed, color reproduction, supported media, and availability. Although we introduced a Mimaki product for the first time, we were able to complete smooth switch to the printer with no trouble. 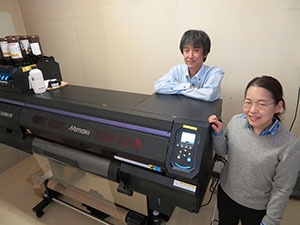 Katsunori Narasaki, head, and Ayaka Nitta of the design office

Soft packaging is a type of packaging used for food and household items and other various products.
Since this soft packaging is used for such products that are distributed to supermarkets and convenience stores throughout the nation, and the enormous quantity (hundreds of thousands or millions) is produced.
Before printing the enormous amount of packaging, you have to decide its design and create samples. This is when the "UCJV300-75" is actively used.

UCJV300-75 was introduced in September 2018. It replaced other company's UV printer that had been used before.
Katsunori Narasaki, head of the design office of the company, was assigned to the office in January 2018. At that time, "the existing printer already showed color unevenness, and the staff managed to keep using it. So, I proposed to replace the printer," he recalls.

During model selection, he saw every single inkjet printer (IJP) from each manufacturer for consideration. Those printers were considered from various angles, such as speed, color reproduction, supported media, and, most importantly, availability for the company.
It was the first time that the company introduced a Mimaki machine, but it was "well-known in the soft packaging industry and gave us reassurance. And our subcontractor also used a Mimaki flatbed IJP, so I knew its quality level," says Narasaki.
That was the first introduction of a Mimaki product for the company. Were there any inconveniences resulting from different operation or functionality?
Nitta recalls: "Immediately after introduction, printing was available and there was no problem in switching the machine."

The company receives jobs in which data is provided or the company works on design. The UCJV300-75 is used to create samples based on the design.
The color and shape of the design can be grasped when you see the data viewed on the screen. However, there are many cases where it is difficult to determine whether the design is good or bad, unless it is actually printed on film. This is when a UV printer demonstrates its power.

In NIHON HOWSOW Co., Ltd., 90 percent of products are used for food items. Because food packaging is required to show the content and give a texture, the company is often requested by its clients to pack food items actually. Even for a case that packs containers, they want to judge its compatibility with the containers or how the color of the containers shows up on the case, by seeing products that are actually packaged. 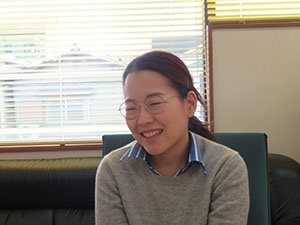 Nitta in the design office says, "You cannot get an OK easily in soft packaging design." 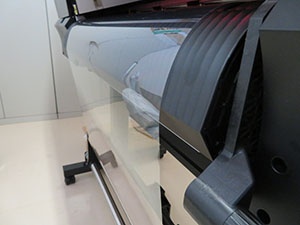 The UCJV300-75 allows for print on the film that is close to the material used in actual production, and allows sales representatives to show the sample to clients to seek their judgment.
* Printable on the actual film depending on the material

Unlike a gravure printer that needs plate making, the UCJV300-75 printer collectively outputs several or even dozens of design patterns that are slightly different in design or color, offering a wide selection to choose from.

Packaging, whose appeal is directly linked to sales, is an important factor. When designing a package, minor changes are repeated as often as twenty or thirty times, which sometimes accompanies output to the printer.

Print media range in size from a small "bag of ramen spice" to a large "rice bag" or "dried bonito bag for business use".
The printer allows you to print even approx. 3-point characters of a small product to be plainly readable, and its expressive power is comparable to that of gravure printing.

Some product packages survive in shelf space for decades, and designing such packages involves responsibility. So, it is a great pleasure to see them on store shelves, says Narasaki, on his rewarding work.

Soft packaging print in Japan boasts its print quality which is said to be the highest in the world. Even for the quality of samples, is it placed under critical scrutiny? When asked such question, Narasaki gives an unexpected answer.

Surprisingly, "Because of its 6-color specification, UCJV300-75 has a wide color gamut and produces more colors than gravure printing."
Nitta adds that she is "telling our sales staff to say to customers that color is not always produced as it is."
* As for color matching of printed materials between gravure printer and UCJV300, more approximate color can be output by using a color management system. 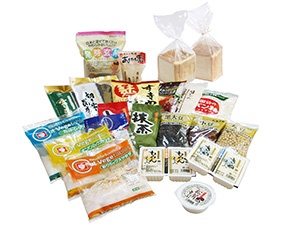 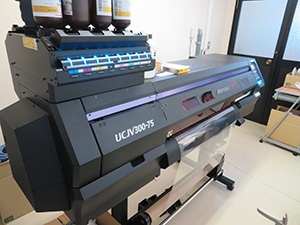 Of course, overwhelmingly well-finished samples undoubtedly "give a very good impression" and gain an advantage during competition. Even when re-creation occurs, a new sample can be output immediately if designed in time. So, there is no worry about making customers wait, which is also a favorable point.

For even better ones

There is a growing need from within our company as well as clients to use the film they prepare for printing. It must be unreasonable to print on the film for actual production, but I hope there are more recommended media, says Narasaki, with expectation.

The company's competitive weapon is an integrated production system that covers a wide range from planning, design, and sample creation to printing and lamination.
By taking advantage of its design section, the company will continue to win customer trust and to generate sales growth, through sample creation by the UCJV300-75 promptly responsive to customers’ needs and through expressive packages realized by the printer. 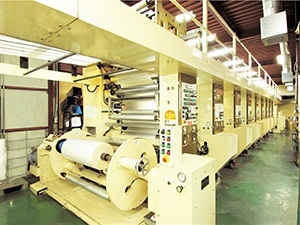 NIHON HOWSOW Co., Ltd. is a manufacturer/seller of film and packaging materials.

The company's design office works on not only packaging design but also adjustment or arrangement to make the design received from customers printable.