Challenges
Improvements
Although having responded to sheet-type advertisements such as outdoor graphics, outside posters, wallpaper, and graphics on floor, we were in need of another way of production as more requests for three-dimensional sign displays and sales promotion items for stores.
UV print using UCJV300-160 allows us to respond to various media. We were impressed by beautiful color development of Mimaki's white ink whose color density is high with no color mixture. It is used on wrapping film for vehicles, as well as on wallpaper and window film.

Good product we do not want people to know about 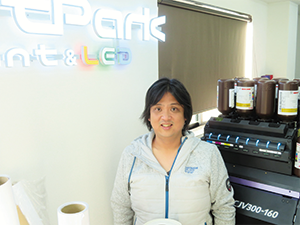 PRINTPARK Co., Ltd. was founded to print a small number of posters. It has become a company that engages in not only printing but also producing POP ads, banners, displays, etc., for commercial facilities and pachinko shops.
President Mitsuo Yamazaki is a well-known idea man in the Nagoya business community. He has developed original products used for enhancing sales promotion, such as a banner with a pole lit by LED and an EL display machine wearable as a vest.

What was underlying the company's foundation was posters for small-scale stores, who often require small quantity but multiple patterns of design. A few or several dozen posters cost too much when offset printed, and the company was not able to cope with them. Accordingly, the company introduced a water-based inkjet printer (IJP) 18 years ago to respond to that demand. This was the start of a relationship with IJPs, and poster production served as the core business of the company at the time of foundation.

Company's logo mark lit by LED, of which color tone can be changed.

After that, since the sales of posters to the area it could explore came to an end temporarily with slower demand, President Yamazaki launched on the next challenge. By also introducing a solvent printer, the company started to receive order for not only posters but also sheet-type advertisements and displays, such as outdoor graphics, outside posters, wallpaper, and graphics on floor. Requests for LED display machines and three-dimensional displays also came in, and the company has gradually become a provider of all kinds of sales promotion items for stores.

"When we deliver some items to pachinko shops, they insist we should also handle LEDs, and then request this or that of in-store decoration, so we end up taking on everything," says President Yamazaki.
The "UCJV300-160" was introduced as one of his powerful ally to cope with the challenge. 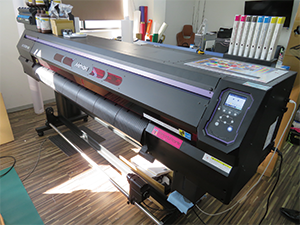 "UCJV300-160" was chosen from among many products including ones from other manufactures.

"Initially, I wanted a UV flatbed machine, but it was too big, and I was also wondering, would I have a chance to print on such bulky media? So, I decided to have a roll type," says President Yamazaki. Since then, he had seen almost all IJPs including ones from other manufacturers, and decided to introduce "UCJV300-160" in consideration of a solvent-based high-speed machine, printer with special ink, with or without white ink, etc.

In the past, the company had been using a solvent machine from other manufacture for white ink, but trouble occurred in some cases due to the slow drying time of white ink and color mixture. So, caution was needed for the current introduction. When used actually, UV ink has dried quickly and white ink has spread well, which produced the color beautifully and caused no color mixture.

“Because of the top-down management of pachinko shops, some of our offers are turned down, even if we get an OK on-site. So, we sometimes need to immediately cope with reprinting, which requires speedy operation. For a solvent printer, we have to take procedures of printing, taking some time, and laminating. But this UV printer would allow us to perform printing and go to the site right away to install the print,” says President Yamazaki. He is so charmed by its performance that he does “not want to tell other people about this machine, actually.” 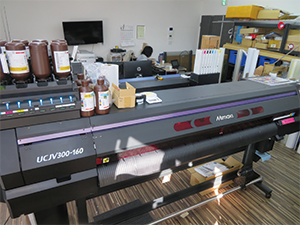 No other ink has a higher white density or print opacity.

"UCJV300-160" was introduced in March 2019. Since then, the company has received many jobs: about 100m² is printed per day at a peak. The average output area per month reaches 1200m², which is achieved by almost full operation.

The details of the jobs are wallpaper and window film, and many other displays inside or outside stores can also be handled. Especially for window film, high white density and high print opacity make its color really stand out when stuck. "Solvent has become quite better, but is still inferior to UV white color," says President Yamazaki.

He used to employ solvent ink, and when asked about a difference in the appearance of printings, he says that the thickness of the ink is noticeable, but that does not matter because "customers are convinced by my explanation. I just say, 'Isn't it good to have a solid texture, making it stereoscopic?'" The company's uncommon jobs include creation of business cards using Japanese-style synthetic paper “Warlon”, as well as production of parking permits with holograms, where a cutting function is also utilized.

The character seal of a local volleyball team "Wolfdogs Nagoya" and stickers put on its goods are also handled by the company. Each order it receives is 3,000 pieces of the seal, and all it has to do is set media at night for output. In the morning, seal production is completed.

When solvent ink was used, due to shrunk media when printed, adjustment was needed during the cutting operation. The solvent also requires application of laminate, which adds thickness, while UV eliminates the need of this process. Other orders include outdoor advertisements, such as decorative stickers in JR trains. 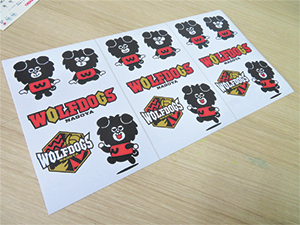 Seal of a local volleyball team. The cutting function is utilized.

Something extra, including idea, is necessary

The company also works on vehicle wrapping. When solvent ink was used, the color of media was shifted as the media was stretched to be stuck to vehicles. However, as far as UV ink is concerned, the color has never changed. The color intensity of UV ink is perfect for the color film used for wrapping, and enjoyable color variation has enabled new expression.

The UV ink is also used in creating products such as key holders. These goods are produced by printing on a sheet of media and sticking it to acrylic, etc. As its unique work, a name printing service for the large emergency battery designed by the company will be provided in the future using the UCJV300-160.

Finally, President Yamazaki says: "Today, our industry needs not just printing but something extra including our idea. We cannot respond to customers' demand unless we ourselves design and create display materials and goods. When we do so, the "UCJV300-160" becomes a powerful ally for us." 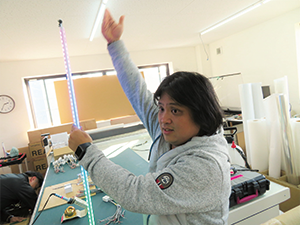 "Prints need your idea," says President Yamazaki. In his hand is a pole for banners, whose color is changed by LED. 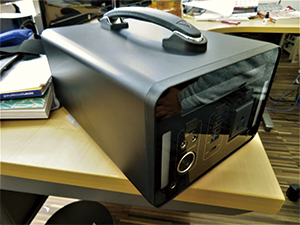 Battery developed by the company. The company will take also an order for OEM with a brand name by using IJP.