Challenges
Improvements
Although mainly engaged in painting by hand, we have more orders for signboard that has been outsourced. To respond to delivery time and to perform minor design change efficiently, in-house production has become necessary. With our skilled employees nearing retirement, we aimed for standardization by machine.
The first inkjet printer we installed is Mimaki's UCJV300-160. There are many jobs with short delivery times, and the UV printer that requires no drying time has good work efficiency and is appreciated by customers as well. Its cutting function is also appealing, which enables the printer to play two roles, allowing us to reduce the installation space and make our business extensive. 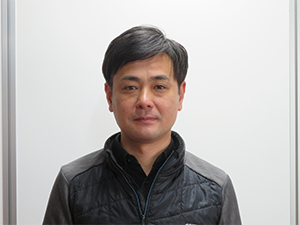 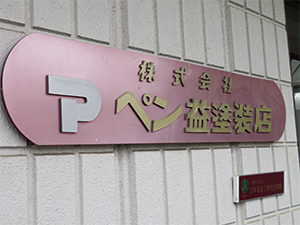 Founded in 1918, Penmasu-tosouten Co., Ltd. is a 100-year-old painting shop. Located in Kuwana City, Mie Prefecture, it has undertaken not only house painting but also a wide variety of other painting work, including waterproofing, factory maintenance painting, and painting for shrines and temples. Since it also has a license for construction, the company says there is much business with public offices and local listing companies.

These days, in addition to painting as its core business, the company has received orders for sign manufacturing and its installation. Originally, painting is mainly done by hand work. However, as the company gradually promoted mechanization, a UV curable inkjet printer (IJP) "UCJV300-160" was introduced in summer 2018. 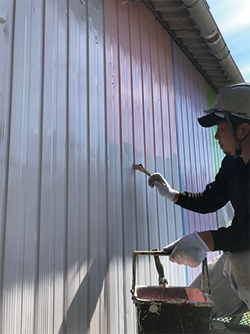 Painting is an artisan job full of manual work

Basically, the painting industry still employs a manual painting method, and in most cases, company names and logo marks are painted on the wall surface, roof, facade, etc., by using stencils. The company has as few as six employees, but they are a few select and skilled artisans, all of whom can handle sales, manufacturing, and installation (installation management) activities.

Kuwana, where Penmasu-tosouten Co., Ltd is situated, is a castle town with factories where a large bearing company is headquartered, and the factories of its subcontractors stand in a row. Many clients of the company demonstrate their skills in painting and repainting the interior/exterior of the factories and are well-known to locals.

These factories are in need of "line sign (e.g. Sign found on that production line)" that shows a product and the names of an operating machine and model. Penmasu-tosouten Co., Ltd receives orders for the line sign. The request for the line sign has been coming in for about 30 years, and the company has outsourced it in the past. Because it is not included in their core business, the company believed that it was enough to outsource to the partner company. 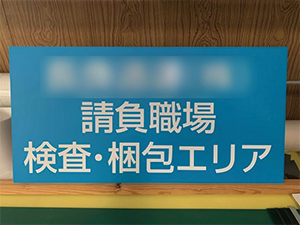 It was an on-site voice that wanted an inkjet printer. As the quantity of order has increased and when the company thought about its response to delivery times, minor design change, etc., there was a need for a system that enables to manage printing at hand.

Although its employees are all experts, some aging staff are close to retirement, so the company had an intention of aiming for standardization by machine instead of manual work. 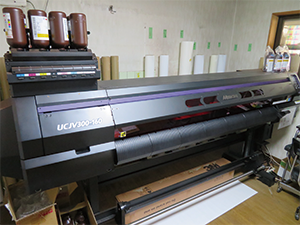 This was the first time for Penmasu-tosouten to introduce an inkjet printer. The company examined various models including the ones from other manufacturers, but decided to select "UCJV300-160" with UV curable ink.

Mr. Kimitoshi Sato of the Sales Department of the company says: "Because there are many jobs that require speed, I thought UV ink with no drying time would lead to good work efficiency." With its appealing cutting function, the machine ideally realizes two different processing methods by itself, which was not available in the past.

Because playing two roles means that less space is required for installation, it becomes a bigger advantage for totally new introduction than for replacement.

Mr. Sato says in retrospect: "In the past, I worked for a design company and had an image of large-format printers of Mimaki. Also, the explanation of the sales representative was precise and made clear to me that required performance was satisfied. Because the printer our subcontractor was using was also a Mimaki printer, we felt quite at ease for introduction." He says printing after introduction was smoothly completed without any error.

The most common production of the "line sign" involves printing on media, laminating, and sticking to polycarbonate material. The work is not so difficult, but the delivery time is very short. Delivery and installation must be completed within no later than two or three days, and some requests next day delivery or even “today” delivery.

Factories of the company's customers often install new equipment, and their lines are frequently changed. Some clients wish to improve the appearance of their factory including signs, because a factory tour, visit, or audit is scheduled. So, there are many unexpected tours and visitors. Line display is required by ISO certification in many cases, and is considered as a "tool for facilitating business talk" by factories who have business with larger companies. 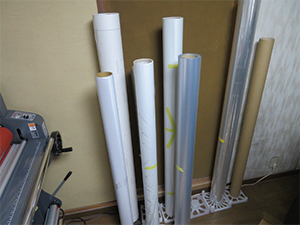 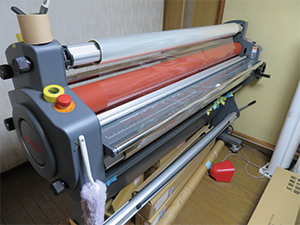 The purpose of introduction of "UCJV300-160" is not just line sign production. The company had an intention of expanding its business range to general sign and display for commercial use.

When contracting exterior painting, the company is sometimes asked to collectively reform not only wall and roof but also sign and display. In fact, in reforming a taxi company, everything has been replaced including its sign. The company has also received an order from a company introducing a wind power system, and put the company logo on the blades of the windmill using print and cut functions. 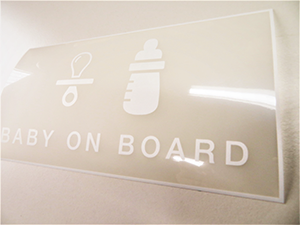 "BABY ON BOARD" sticker produced as sample 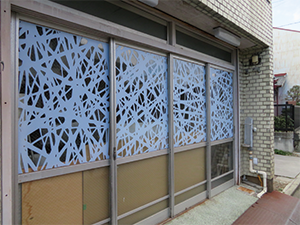