Mimaki Engineering Co., Ltd. (Headquartered in Nagano Prefecture, Tomi City; President, Kazuaki IKEDA) announced the release of large-format inkjet printers "JV300 Plus" and "CJV300 Plus" which are equipped with environmental-friendly solvent ink for signage market, as well as the cutting plotter "CG-FXII Plus", available from October 2019.

Since Mimaki developed a large-format printer equipped with aqueous pigment for the first time in the world in 1996, it has released innovative printers for industrial use to worldwide market. "JV3 Series" using our solvent ink which were released in 2002 have been used by many customers, establishing a position as standard machines in the industry for signage market. "CJV30 Series" which were released in 2008 have achieved space-saving design and work efficiency by providing printers with a cutting function performed by a cutting plotter traditionally.

As the "Mimaki Eco-cartridge", an environmental-friendly designed ink cartridge to apply replaceable 600ml ink pack (*1), has been adopted in "JV/CJV300 Plus" we will release this time, customers can replace its ink package of 600ml ink pack with a new one by themselves by reusing its plastic case. The number of 440ml plastic ink cartridges that were thrown away every ink replacement will be considerably reduced. This helps to preserve the environment by reducing the amount of plastic used.

And, Labor-saving process & business efficiency have been achieved through the addition of such new functions as "ID Cut (*2)" which allows for unmanned and continuous cutting operation as well as, a new connection method, "Ethernet connection (*3)", that can send data to any printer via network cable.
In addition, "MAPS4", a new technology of our own to control image quality to deal with "Ethernet connection (*3)" of "JV/CJV300 Plus", supports beautiful printing results while reducing banding. The newly developed winding device enables stable production to be achieved through high-quality winding operation.

"JV300 Plus", "CJV300 Plus" and "CG-FXII Plus" are the next-generation products that will realize reduction in environmental impact and labor-saving process & business efficiency, to which the aforementioned  Mimaki's technologies are 'added', while inheriting our own developed technologies.

1. The environmental protection can be achieved by means of “Mimaki Eco-cartridge”, an environmental-friendly designed ink cartridge.

The "Mimaki Eco-cartridge", is a reusable environmental-friendly designed ink cartridge adopted to "JV/CJV300 Plus", which customers can replace a 600ml ink pack by themselves.

As there has been increased interest in "environmental value" at industrial sites in recent years, we also promote more environmental-friendly product development under such a concept as "Mimaki Green Technology". 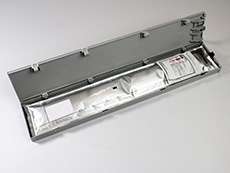 2. With the addition of labor-saving process & business efficiency, workstyle reform is realized

A new function "ID Cut function" that enables continuous cutting operation to be performed automatically is adopted. The "ID Cut function" is the function that automatically scans printed-out register marks with ID, then reads and cuts cut data. While any operators scanned register marks and specified cut data for each cutting job in the past, use of the "ID Cut" function is now made possible to perform unmanned and continuous cutting operations, and operators can proceed with another operation simultaneously when the machine is performing the cutting operation.

JV300 Plus is capable of using ID Cut by means of the CG-FXII Plus after printing out data provided with ID. 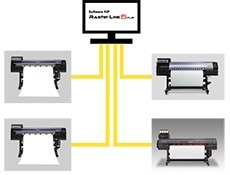 To the conventional connection method to PC for RIP, Ethernet connection has newly been added. Unlike the conventional USB connection, connection via Ethernet can be established via network cable, and thus connection to a printer from any PC within network is now available. More free and efficient work environment can be put in place, by editing data using any PC in your design room, then sending print data directly to a printer in your printing place, for example.

MAPS: Turned ON
Because printing pass boundaries are faded in gradation, a beautiful image quality is ensured by reducing banding and uneven color.

MAPS: Turned OFF
Banding occurs at pass boundaries. Image quality is damaged seriously because horizontal streaks and uneven color printing are brought about.

Through renewal of the older winding mechanism, stability of media conveyance has been improved, and thus the maximum loadable media weight has changed from 40kg to 45kg. Also, it is provided with such a function as standard that prevents edge-surface meandering when any media are wound up, realizing stable and high-quality winding. 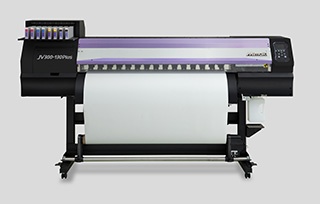 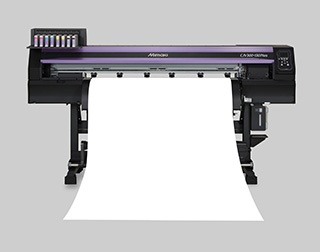 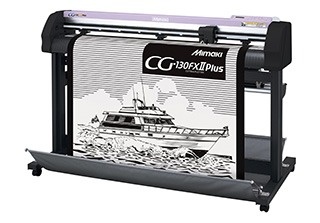 *9: Maximum sheet feeding length differs depending on the software.
*10: Sheet width to cut off from the roll.
*11: Restricted sheet width.
*12: Provided that the blade specific to fluorescent type vinyl (SPB-0007) and the blade specific to reflective sheet (SPB-0006) are used.
*13: Pouncing tool intended specifically for pouncing shall be used.
*14: The goods on the market are φ8~φ9 Pen. Accuracy and image quality are not guaranteed.