Hotaru Corporation Co., Ltd., located in Osaka, was founded in 2007 as a subsidiary of Hotaru Printing Co., Ltd. that works on offset printing. With its concept, "commitment to print on media other than paper by using digital printers," the company started business with such unconventional idea in the then printing industry. 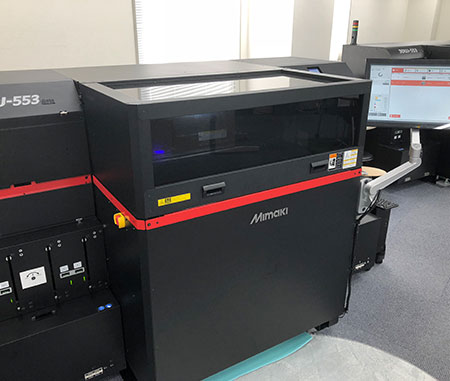 Introduction as an extension of 2D printer

The full-color 3D printer "3DUJ-553" introduced by the company is also an extension of 2D digital print.
Since the "3DUJ-553" makes use of inkjet printing technologies accumulated in the field of Mimaki's flat-head inkjet printers, "This printer can be used as almost like a 2D printer," says Susumu Fukunaga, Executive Director, "and I liked that and decided to introduce it."
Although the company already had a full-color 3D printer, the plaster-based type needed to go through processes that almost required artisan skills such as polishing and re-coloring for modeled objects before they become products. 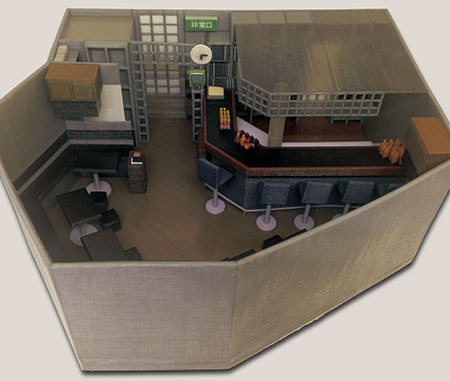 The "3DUJ-553" enables more than 10-million color representation that is fine in details, in addition to real, delicate expression that needs no re-coloring.
It also has a clear ink that allows users to apply glossy expression to an area they want to and express translucency such as dragonfly wings.

Conventional plaster-based objects deteriorate after being modeled, so it was difficult to keep them intact for long time. The resin material used in the "3DUJ-553" hardly deteriorates and is characterized by its long durable years.

In 3D print, to support holes and extremely small parts, a support material that will be removed after modeling is inevitably needed. Since conventional 3D printers usually employ support materials that often get stuck firmly around a printed material, it was necessary during the post process to scratch them off, as if you dig out a fossil.
Scratching needs a certain level of training, and when an object has detailed expressions, it was damaged in some cases.
The "3DUJ-553" uses water-soluble support material that dissolves when soaked in water and allows the printed material to be taken out.
Moreover, because there is less concern for damages, even a detailed area can be modeled almost to the limit, enabling a wider range of expression than ever before. 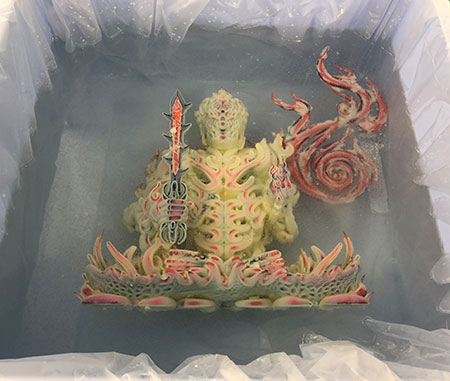 Water-soluble support material can be removed by just soaking it in water.

Hotaru Corporation have tested this printer repeatedly since last year and has already output and created many 3D models.
One of its representative artworks is 3D models of the world heritage "Gunkanjima (Battleship Island)" donated to Nagasaki University. This large-size 3D model, which is one-780th of the actual size and has a length of 62cm, has become a reality when Fukunaga, who promoted to introduce the "3DUJ-553" printer, jumped in Nagasaki University to offer production.
The 3D measurement and 3D data creation of this Gunkanjima was implemented by Akira Demizu, Doctor of Engineering of Graduate School of Engineering in Nagasaki University. Fukunaga has created this 3D model.
"Initially, there was no 3D print know-how, so I had to repeatedly fail to create the Gunkanjima before it was completed. What I learned then is very helpful now," says Fukunaga. 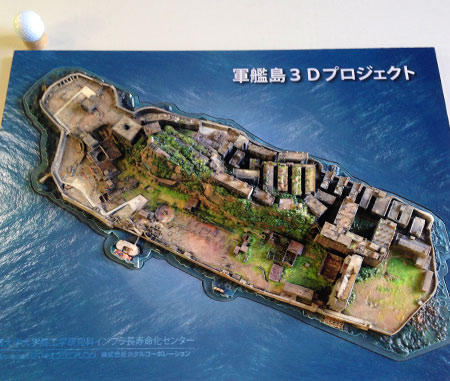 Gunkanjima with a length of 62cm, the same size as the one donated to Nagasaki University

At first, he started to produce a small model and gradually made it larger to realize the one-780th model with a length of about 62 cm that was donated to Nagasaki University this time. The output time was about 40 hours. 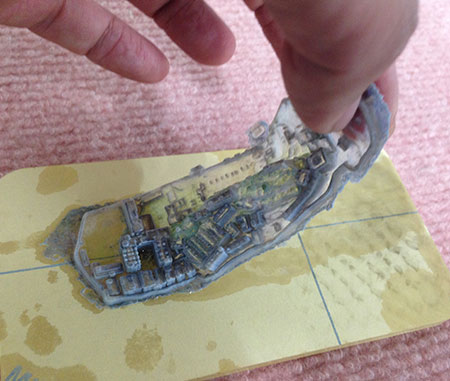 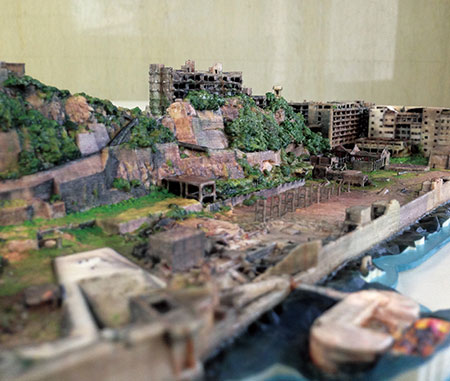 It was on January 12, 2018 that the 3D Gunkanjima model was donated to Nagasaki University.
He was appreciated for "enabling to touch and feel" the overall birds-eye view of the Gunkanjima that could be only seen in the 3DCG on a PC screen in the past.
The "3DUJ-553" is capable of providing expression with a detail of about 0.2mm, which makes it possible to reproduce small structures such as conveyor belts and sinkholes on the ground, not to mention buildings and roads.

When what is on the PC screen becomes a reality

The company already works on modeling objects by creators.
Because Fukunaga had "an intention to publicize to the CG industry," he once again aggressively went out to the market by himself. 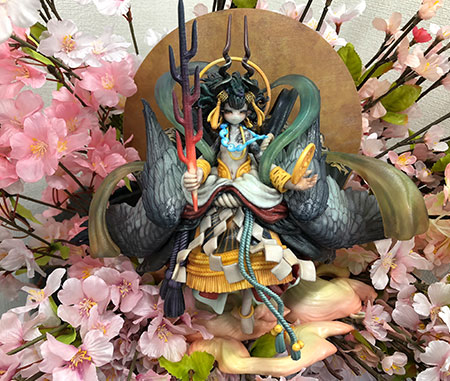 The latest artworks of creators that were output by the company's printer. 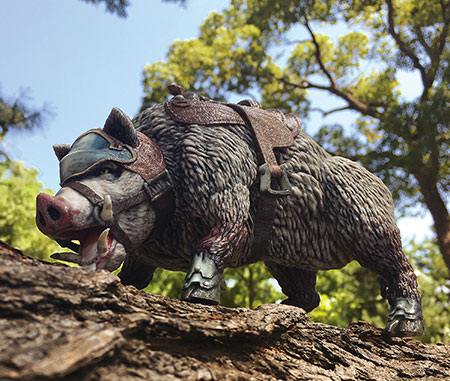 Even very meticulous areas can be represented.

"When I actually created a model, I was really appreciated by the creator. For creators, a story where things on the screen jump out into the real world is what they are really dreaming of. It has shocked 3D modeling artists," he says happily.

However, the finish of a created object that was ordered initially did not satisfy him, he says.
This is because the data provided to him had been created to be used with a plaster-based 3D printer, so it contained hairs and clothes wrinkles that were deformed for the printer.
"This 3D printer can express delicate gradation and reproduce details such as each strand of hair. It has enabled more realistic and beautiful 3D print than ever before," says Fukunaga, explaining its performance.

Now, the company collaborates with CG creators to promote digital model production.
CG creators could see and move 3D CG data on the PC screen, but it was difficult for them to pick up realized objects.
Although they used to model figures by using plaster-based 3D printers, the quality, as already explained, often varied depending on human factors such as polishing and re-coloring.
Some people might think creators themselves should engage in operations such as scratching and coloring because they can draw computer graphics, but it isn't easy for them to use pens and brushes for paining, which is totally different from working on their computers for creating CGs.
The "3DUJ-553" would solve this problem and faithfully reproduce graphics almost as desired by creators. 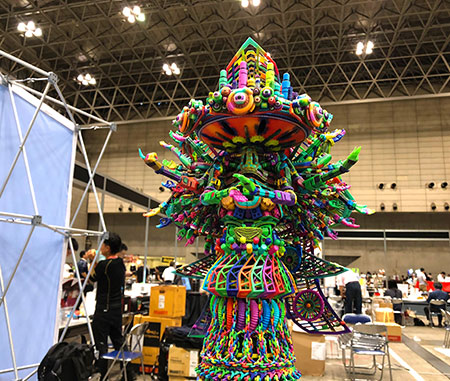 One of the largest in creator works, characterized by vivid color and elaborate modeling

Hotaru Corporation introduced the second "3DUJ-553" in April 2018.
By introducing the second unit, small-size models that should be delivered quickly and large-size models can be sorted, which has increased work efficiency.

Also, the time when modeling finishes, which was completely out of control for one printer, can be managed now, leading to an improved working environment. Even if one printer stops for maintenance, the other one can back it up and thus the company now "causes no more trouble for customers" and has made progress in customer services.

"We now promote creation of 3DCGs of VTubers. We will also promote use in graduation products of art universities and art schools and academic activities such as the creation of Gunkanjima. We aim for 'creation of a new market' launched by us, not a business that only moves what is available now," Fukunaga says of his future vision.

"No matter how hard we think about a useful idea in the company, it won't be generated. I think it would be better to find a new usage together with users," he adds. 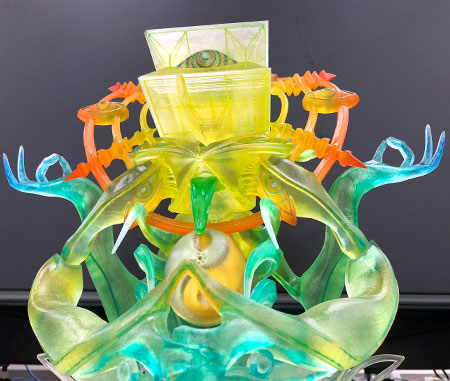 A trial of new modeling design with using clear ink 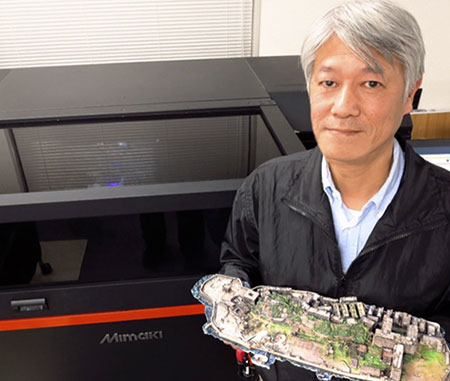 Susumu Fukunaga, Executive Director, standing in front of the "3DUJ-553" with a Gunkanjima model in his hands