JMC Corporation was founded in 1992. The company engages in prototype production of sand casting in which melting metal is poured to manufacture parts or other products, while it also works on metal cutting, measurement and inspection employing industrial CT scan, etc. It is headquartered near the Shin-Yokohama station of Tokaido Shinkansen, while its Concept Center (foundry) is located in Iida City, Nagano Prefecture.
With its unique business style and technical skills, the company has increased sales and was listed on the Tokyo Stock Exchange Mothers market in 2016.
Already equipped with 3D printers employing techniques such as stereolithography and powder sintering/fixing method, the company introduced Mimaki Engineering's inkjet 3D printer "3DUJ-553" in June 2018. 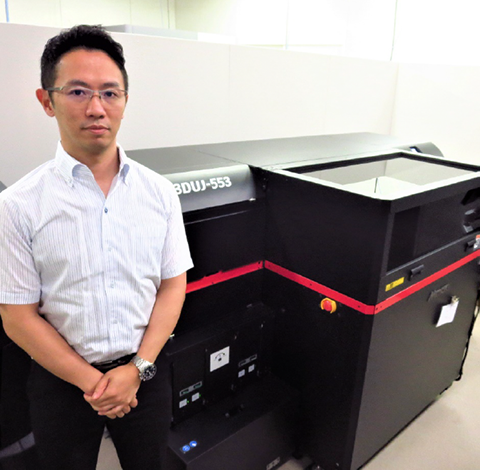 The company excels at CT scan, a system that can take photographs of the inside of objects using X ray. The system is used in non-destructive inspections, the understanding of internal structures, conversion to 3D data, and so on. Understanding the internal structure that could not be seen before, or extracting its defect, helps to support product development, identify failure causes, reduce man-hours, etc. This 3D data handling is utilized in casting and 3D printing.
Using the 3D printer, the company creates human-body and organ phantoms used in the medical field for simulations and surgical training for doctors, not to mention prototype of industrial product components, such as vacuum casting, aluminum vacuum deposition, and machined screws. 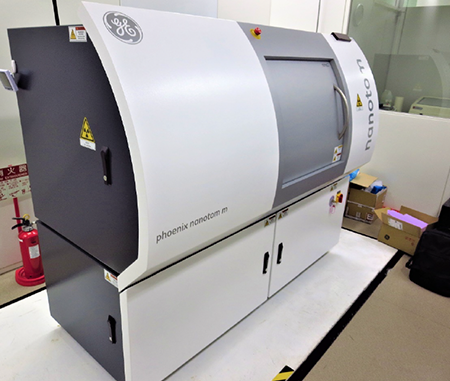 There are more than one industrial high-performance three-dimensional CT, which can be combined with a 3D printer.

Watanabe, CEO of the company, recalls: "Originally, we had a full-color plaster-based printer. But at that time, there was no order requesting us to add color."
The reason is that plaster-based printers only enable users to roughly specify colors and hardly allow them to add colors that satisfy customers, and the color expression only has a level of "almost pink" or "close to red." For this reason, the company decided not to receive orders requiring coloration, while customers believed that it would be better to add color by themselves.

In the past, Watanabe tried to create a figure of a customer's dog using data given by the customer with the plaster-based 3D printer, but he only received a harsh evaluation: "It does not look like my dog, neither does a dog."
Because coloring is a severe business that needs to maintain and nurture paint experts, he gave up such business in the end after considering the time and effort it required.
Last year, however, he received a request from a valued customer to deliver colored figures, and to respond to this request, he started searching full-color 3D printers.
Although there was another 3D printer introduction given to him from other company, the high-quality color expression of "3DUJ-553" looked attractive for him. 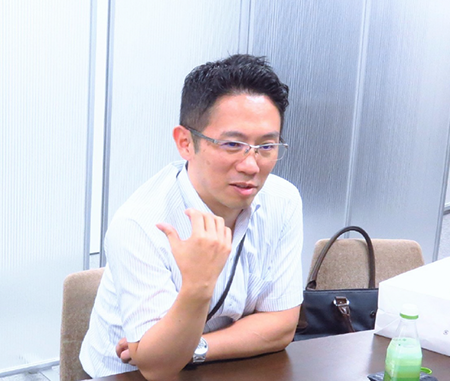 Considering the introduction of the printer, Watanabe asked the responsible personnel in the company about its possibility, but he received answers that denied full color, and even made them wonder what the President was thinking.
However, when he showed them the "3DUJ-553", it was highly evaluated by them as "ultrahigh-definition color" and "high speed."

The most praised point by the staff members was the "appearance and feel" of output objects, he says, and the printer was hailed with surprise because "it can add color naturally to modeled objects," in addition to superior color development and data-based modeling.

He also says that the color expression of other company's 3D printer was hardly data-based, leaving details vague in terms of coloration during creation.
At first, Watanabe suspected that Mimaki may have brought champion samples, but he changed his thought when he actually saw the demonstration of modeling.

Mimaki's sales rep looks back on that time: "Basically, we do not bring champion samples, because they will reveal faults eventually. It is important to have confidence in our products and give an appropriate explanation."

"I'm fed up with the pattern in which I was shown champion samples first and got disappointed later. The Mimaki’s way was not like that and gave me a good feeling, which lead to introduction," says Watanabe.
The explanation made by Mimaki was logical and convincing and conveyed strengths and challenges appropriately, helping him grasp a solid understanding of the "3DUJ-553" potential, he says.
He is also impressed with solid support given by Mimaki, allowing him to feel safe in this regard when making this decision. 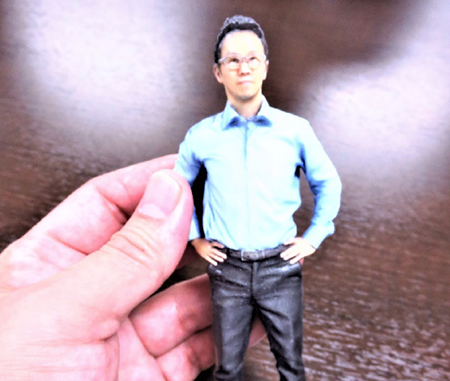 Sample of the 3D figure of CEO Watanabe, who admits it resembles him.

How about user experience after introducing the "3DUJ-553"?
It seemed there was no doubt that its color reproducibility strongly impressed the company.
Customer's evaluation is also high, and the figure, which was once said to "not look like a dog," can reach the level where it is said to be "exactly like my dog."
Because there is no need to provide coloring experts and thus 3D-printed products can be delivered as finished items, the company has propelled the business a step ahead without making unnecessary investment.
Watanabe says of the current situation: "The times catch up with our business sense."

Also, the field site has positive things to say about convenience that is given "thanks to the invulnerability of objects" during the work process.
Plaster-based printers require delicate operation, because modeled objects are very fragile and may be partly damaged unless handled carefully.
When using the "3DUJ-553" printer, ink is firmly cured soon after completion, and objects have very high durability.
The water-soluble support material laminated during modeling to support fragile parts of an object can be removed easily, by just soaking it in the specified solution. This means there are fewer defects such as crack and chip due to removal of the support material.

Intuitive operation allows users to use it like a smartphone.
Stability is also a key feature of the 3D printer. If you get the printer to work before you go home, you will see a completed object next morning. Unattended operation is achieved with almost no fail. 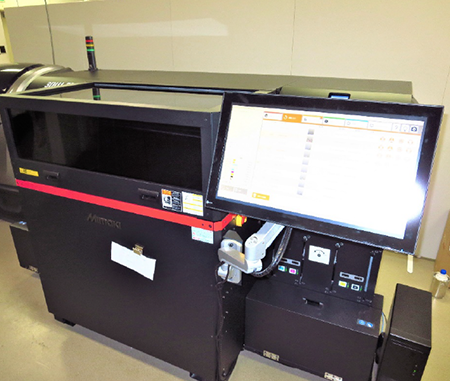 What do you do by using the 3D printer?

JMC's company logo represents a "wolf."
Watanabe says it represents the company's policy of "Be a lone wolf, do not flock, or do not have cozy relations".
The JMC's purpose of introducing the "3DUJ-553" is differentiation.
If you can develop a business different from that of competitors, you don't have to compete with them on price in 10 yen or even one yen, but there are few companies that can achieve such business as JMC can.
Currently, a 3D color printer that can express 10 million colors is the "3DUJ-553" only, and when this key feature, combined with the company’s data creation ability using CT scan and 3DCAD, metal casting/cutting techniques, etc., is fully utilized, it will drive unconventional product development. 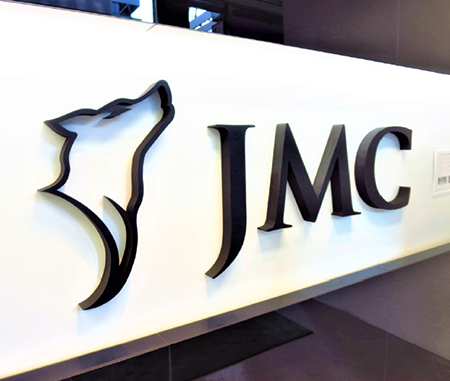 JMC's company logo is a "wolf." It's a symbol of its unique business.

The most common application is pet figures, followed by family photo figures. The company also anticipates that a request of 3D modeling of the beauty of body builders and the likes will be increasingly demanded in the future.
One of the most demanded pet figures is sold for tens or hundreds of thousands of yen, "more expensive than a dog you bought in a pet shop," but there are orders one after another from pet owners.

The "3DUJ-553" with full-color and clear-ink functions also seems to take a key role in creating organ and human phantoms for medical use, especially when modeling such objects in which the inside of the body shows through and organs are colored.
The company has an employee who has nurse's license and can interact on equal terms with doctors, enabling reproduction of characteristics required by medical sites as modeled objects.
They contribute to various clinical departments, such as dentistry, orofacial orthopedics, urinology, and respiratory internal medicine. 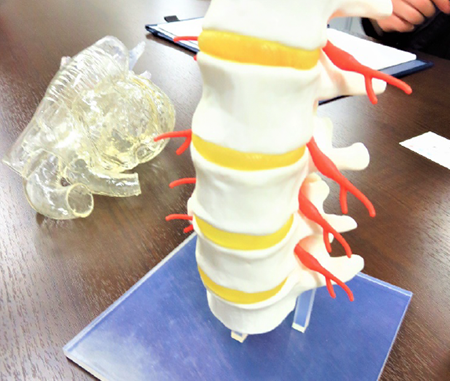 There is also an experimental unique work by an operator, who applies CT-scan to a gecko, makes a half of its body surface transparent, and represents the bone in color.
"I've told operators that they may feel free to experiment for development, but this was really a surprise," says Watanabe. "I said, 'How much on earth does it cost to make a gecko with the lavish use of CT and 3D printer?' (laughing)" 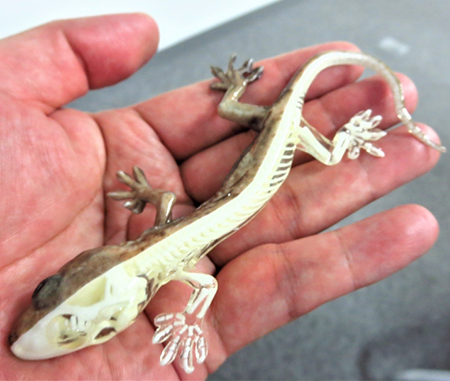 A gecko that was created by a combination of CT

The work the responsible personnel is proud of is "a figure of a comedian."
When the 3D printer was introduced by a TV program, he created a figure of the comedian.
Under stringent conditions such as "clear painting" and "delivery time as short as the next day," the printer delivered high quality that amazed the comedian.
"Even in an urgent job in which the customer wants to fetch the ordered item, the work has become a good one, which pleased me," says the responsible person, looking back on the work.

And the fact that "customers want to fetch orders" is also a key point, because this is why the company is headquartered in Shin-Yokohama. The company located near the Shin-Yokohama station can bring products directly in a bullet train for delivery. Or, they sometimes complete their mission by picking up a created product and getting back to the office immediately.
Many such rush jobs are the character of the JMC's business.

From now on, the company aims at the immediate goal to double its current monthly production using the 3D printer.
"It is important to disseminate the fact that the full-color print quality given by a 3D printer is extremely high," says Watanabe. "Making a proposal to customers of what changes will be made and what is likely to happen when color is added, as well as focusing on narrative use, will lead to development of the potential of 3D printers, I think," Watanabe says of his vision.
"Currently, there are overwhelmingly few people to create three-dimensional data. I hope there are more places to obtain 3D data, like photo booths to take souvenir pictures or make stickers. If the general use is developed in such way, the value of Mimaki and its 3D printers will increase, won't it?" He adds a proposal as well.