B＆P Inc. is a company that uses inkjet printers to produce various advertising materials and displays. The company ships a wide variety of large-sized prints and modeled objects on a daily basis to meet customers' orders.
In March 2018, the company introduced Mimaki Engineering's "3DUJ-553" 3D printer. It has started to receive test orders since June and has modeled 3D objects as requested by customers. 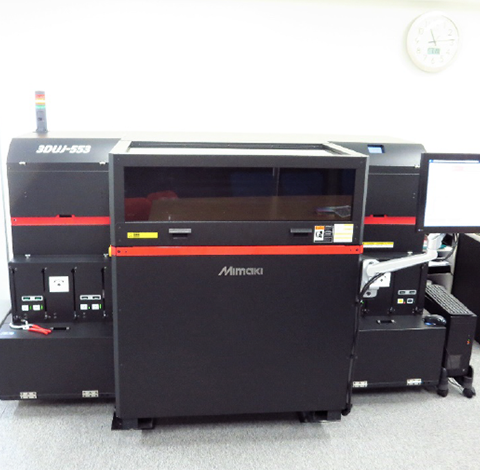 Introduction requested by the field site

"I thought 3D print was a good starting point to meet customers who were totally different from our traditional customers," says Yusuke Nakamura, General Manager of Business Development Department, who promoted the introduction.
Introduction of a 3D printer was also often requested by the company staff as equipment they wanted to introduce next time.

President Tomoya Wadayama recalls: "The "3DUJ-553" 3D printer may allow us to use an approach that takes one step further, in addition to conventional proposals to our customers. And it may become an opportunity to develop new customers, I thought, and I made up my mind." 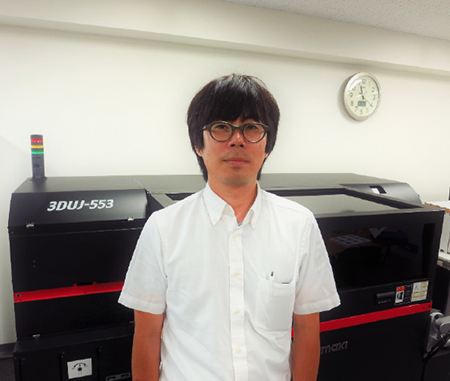 They agree that the decisive factor that made the company select the "3DUJ-553" from among many 3D printers was its high quality.

Nakamura's evaluation on its capability of more than 10-million full color is "overwhelming."
"Introduction of a 3D printer that cannot add color has no meaning to us, because we have no coloring personnel and facilities. Even a plaster-based 3D printer that can add color needs re-coloring and polishing at a later time, so we have determined that the introduction was difficult in terms of our business purpose," says Nakamura.

The strength of modeled objects is also "overwhelming".
When an object is manufactured using a plaster-based printer, it becomes so soft that delicate handling is required to take them out. Since the "3DUJ-553" is a UV-curable printer, the strength of the object is already very high when it is completed, and there is no concern for damages that may occur when it is taken out. 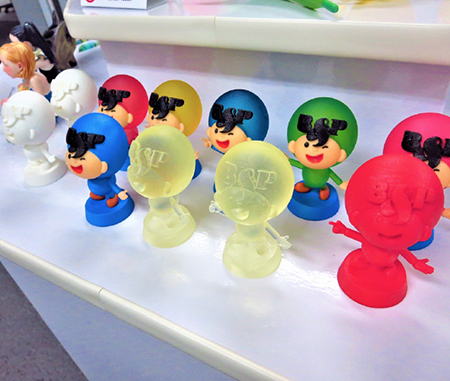 Meanwhile, the "support material" used in the 3D printer to assist in modeling is created in a manner where the material is attached to the object. Therefore, it has to be removed after modeling. When plaster is used, it has to be scratched off from the object, so this operation requires special personnel, and the object may be damaged in such operation.
Since the "3DUJ-553" uses a water-soluble support material, removal is done by just soaking the object in the dedicated solution. 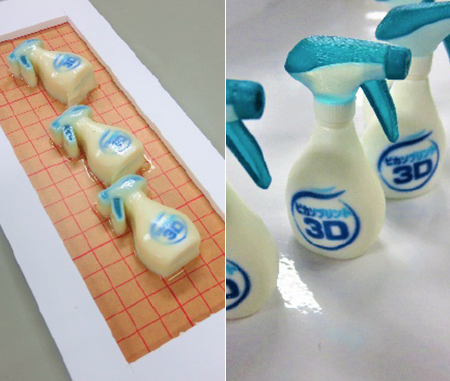 Water-soluble support material. Objects taken out during the course of removal (left) and the ones for which removal is completed (right)

From all this, advantages of the "3DUJ-553" such as easy handling, no need for post-process personnel who perform color finishing, coating, polishing, etc., become apparent.
The basis for selecting this printer is more than these capabilities.
B＆P has introduced a number of large-size printers of Mimaki Engineering, and "there has been a sense of trust as well," says Wadayama.
In terms of support, "Mimaki's service rep would not let us wait even a few days and come to solve our problem," says Nakamura, who also trusts Mimaki.
When asked how often problems actually occur, he replied "at most once in a month," saying the company does not use maintenance services very often. 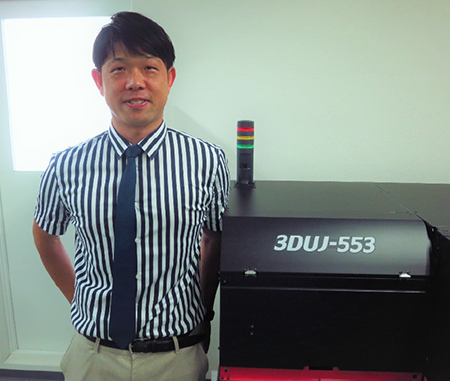 Hoping to increase recognition of the printer all together

The "3DUJ-553" introduced at the end of March. In B＆P, the printer is staffed by dedicated personnel who have learned to use software for modeling solid objects, and test print has been repeatedly performed.
"The responsible personnel have acquired knowledge quickly and created various kinds of test objects. Thanks to their initial interest in 3D print, they have acquired knowledge relatively fast," says Wadayama.
Use of specialized software such as 3DCAD is seemingly difficult, but for those who have the knowledge of Illustrator like them, it is possible to learn how to use it in a short period of time. They still continue to accumulate the know-how while using such software.

In June, the company's sales reps started to promote PR activities by taking 3D printer samples with them to receive test orders. The company has begun to give shape to customer requests.
Initially, introduction of the "3DUJ-553" was given to the clients of large-size posters and signs, POP display for sales promotion and the likes at which the company excels, and it received more feedback from them than expected.

Moreover, orders and sample requests from companies manufacturing souvenirs, amenities and original goods have come, and this situation explains what Nakamura says at the beginning of the interview: "I thought 3D print was a good starting point to meet customers who were totally different from our traditional customers."

On the other hand, customer's recognition on 3D printers is not so high today. "Currently, we are gradually spreading the awareness," and although the word "3D printer" sounds familiar, "where it is placed," "how much it is," and "what we can create with it" are not known well.
On the contrary, among the company's customers, relatively large one who introduced a 3D printer a few years ago ends up "failing to make use of it," while the other reaches a decision where it "had better outsource modeling to specialists." 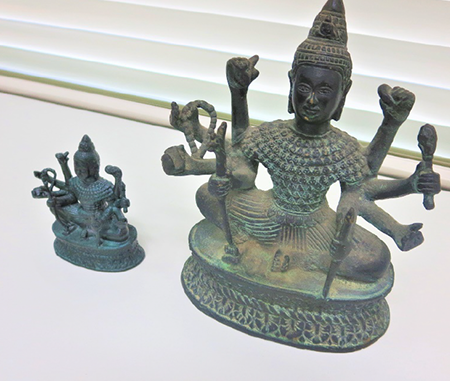 Replica that looks like a real Buddha statue was also created. The real one is right.

Offering high quality and the benefits of cost/delivery effectiveness

As of July, full-fledged operation is yet to start, but the feedback of the clients who had experience is favorable in general.
Customers who have so far used plaster-based 3D printers said that the color expression in 10 million colors "can generate more subtle color difference than we thought." There were also customers who said they "don't have to think about painting."

As for delivery time, the printer is also appreciated by the customers for meeting short delivery time, saying they are "grateful to make it in three days, instead of two weeks spent in the past."
Needless to say, there is another advantage that "there is no need to make a mold and thus we can generate slightly different versions."
In injection molding, when the mold is manufactured, a production unit number most used is more than 10,000 pieces. This is because otherwise a cost of hundreds of thousands or millions of yen to make the mold cannot be absorbed. When the number of pieces to be manufactured is small, their shape should be simplified, or they are simply abandoned. This has been the reality of solid object modeling so far.
With the advent of the "3DUJ-553" 3D printer, inexpensive, full-color modeling has been enabled even for a small number of pieces like 100 or 200.

When asked about a request for the "3DUJ-553" printer, "Clear ink is a good function, but higher transparency would enable more applications, such as acrylic fixtures,” says Nakamura, replying to the question.
"We need higher strength," says Wadayama. "When an object is used as part of a component, it may be damaged in some cases, or it will bend in a high-temperature room, I heard," he says, expressing his hope for improvement.

As for color, Nakamura "would like to have a color matching system to comply with the Japan Color certification," because more accurate color matching would help achieve convenient, higher quality prints, he says.

"The Business Development Department Nakamura belongs to is a department that creates new business and customers, not the one that simply increases sales. The "3DUJ-553" is a product that drives such department," says Wadayama, with expectations of the printer's further use. 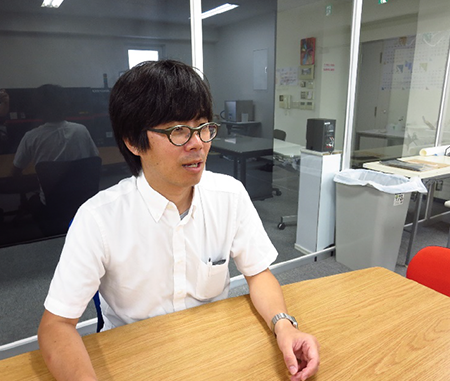 Nakamura, who appeals for the necessity of color matching